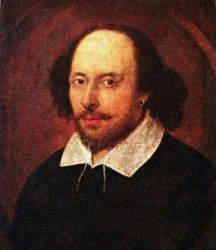 William Shakespeare (baptised 26 April 1564; died 23 April 1616) was an English poet and playwright, widely regarded as the greatest writer in the English language and the world's preeminent dramatist. He is often called England's national poet and the "Bard of Avon". His surviving works consist of 38 plays, 154 sonnets, two long narrative poems, and several other poems. His plays have been translated into every major living language and are performed more often than those of any other playwright.

The Introducing Shakespeare Unit of Work is designed to broaden your knowledge of some of Shakespeare's most famous works.  Using the Animated Tales of Shakespeare we will view a range of plays in animated form to develop an understanding of the general plot, characterisation, Shakespearian language and themes, before moving on to produce creative pieces such as a dramatic presentation of key scenes, a letter to an agony aunt, trip to The Globe diary entry, crime scene investigation report and a synopsis for a new film version of your favourite play.

Exploring the work of arguably the most important writer of all time in a fun and interactive way will help breakdown the language barrier and aid your future studies when analysing Shakespeare in more detail at Senior Level.

The Animated Tales of Shakespeare